The "Horse Stamp" - Scanned in Greece by Mom Kat 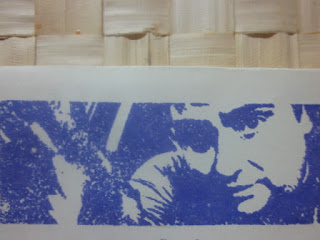 I’m not sure when I started to get into stamps? I mean, it’s not that big of a deal and I’m kind of saddened by that last sentence, sounds so silly. There’s something about an ink pad and a carved rubber image that’s fun. It feels like magic when you press the thing down to the ink and there you go, you’ve got something that looks like something. All of the stamps I’ve purchased were at thrift stores, or discount stores, or something of the like, never anything I’ve made. I know quite a few people on IUOMA that make their own, which also feels like a type of magic. I just buy mine, and I just bought this one of my face and an almost undecipherable horse off to the left. It’s the infamous picture of me in Hawaii, sitting in Nick’s truck, looking at the foliage and the “wild” horses. As one of the equine bastards poked his head into the cab, I decided to take a picture. At the exact moment the camera went off, the neck-beast chomped down on my right arm. Fortunately the picture came out really well, and is one of my favorite pictures ever taken of me, a self-portrait if you will. Not too much romance in the stamp, I just uploaded the picture online and it shipped to my house. I did a smaller circular one as well, but I don’t think people notice that it’s me. This image was scanned by a mail-art friend in Greece, Mom Kat.

Cappuccinoandartjournal.blogspot.com said…
Jon--I had wondered where/how you got that stamp. Can you share where to upload and order one? I'd like to get one too...
January 14, 2013 at 1:43 PM

zzzzzzzz said…
Actually, I got it through staples.com, the chain office supply store. Sometimes they run a half-off deal on their self inking stamps...just check in every once in a while.
January 15, 2013 at 10:16 AM