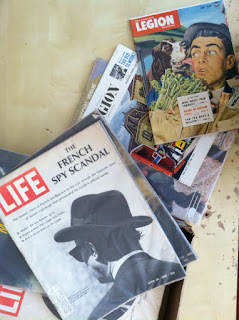 About two weeks ago I had a panic attack. All of my usual shops where I find all of the magazines I like to rip up had run dry. There was no more Look Magazines, Vogue’s, or the standby Life’s from the 1950’s and 60’s that are almost everywhere. Everyone must have had a subscription to life at some point considering how many of them around. Actually, it wasn’t that I couldn’t find any of these older magazines; it was they were getting too expensive. Each one of them was running around three or four dollars at the cheapest. I was worried that I wouldn’t have a cheap supply of them in the future when I had finally run out. I could swing three or four dollars a magazine but I didn’t want to. To combat all of this, I found myself buying a lot of newer magazines and books. The new ones just suck, they don’t rip well and my colors aren’t like I like them. I like my art with dust on it, no matter the genre, and I like my art supplies to have the same requisite dust…or basement mildew in most cases.

And then I saw them, a big pile of mostly Life Magazines (what a surprise) at my local consignment store, the one that has the strange auctions on Tuesdays. I like placing silent bids and then waiting for them to call me in their folksy tone, telling me that I had won something that doubted anyone would actually buy. I ended up with fifteen or so of the things for less than ten dollars, which will keep me in business for a little while. Actually the other magazines hadn’t been completely used up, but I was starting to worry…I like my old magazines. This summer I’m going to make a lot of bigger items and try and send as many postcards as I possibly can. Some of these magazines pictured will end up in places all over the world.