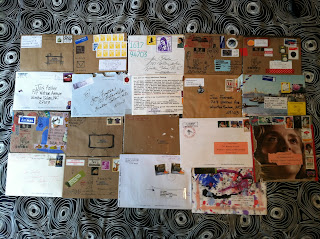 I guess it’s been about a month since I sent out the first round of Golden Tickets. I called them golden tickets, which in the long run, caused a lot of confusion. The actual envelop that I sent to people didn’t contain a golden ticket, so when everyone got the envelope they weren’t sure what the project was about. Altogether, I sent out 42 invites to people. All of them were volunteer, well…almost all of them were. I sent blindly to a couple people but have only received one of these back. To drum up interest, I’ve posted a couple stupid pictures of myself on the IUOMA site to remind people “send that thing in.” Not sure it’s working, but I’m going to ramp up the pressure in the middle of June. I can foresee someone not making the zine and then sending their submission well after I created the whole thing. Right now I have a total of 19 cards back from people, which I’m pretty stoked about. And thankfully they’re not all from the US. I’ve got a UK in there, Ireland, Greece, France, and Australia, which I’m happy about. Sending those back to people at the end of summer is going to be kind of expensive. That’s why I’m sending everything out at one time, to cut down on shipping costs and time. Not sure how I’m going to put this together…I’ll figure that out later.

Cappuccinoandartjournal.blogspot.com said…
I am really looking forward to seeing the zine. Thanks for doing it.
July 8, 2013 at 6:51 PM