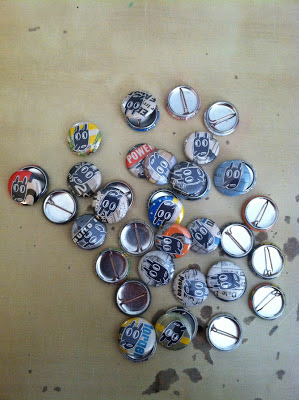 At some point I got interested in making buttons. Two things, I don’t actually make the buttons, I do little to create them, I basically pay for someone to make them for me. So I guess I got interested in the whole button thing as soon as my friend posted online that he was making them. This makes my second order with the lovely John Rivera, record mogul, and button maker. The first round of buttons was just an image of my face and the infamous Michael Magdalino Winston Salem design. The newest design was supposed to be just the Ray Johnson bunny, but John decided to spice things up a bit. He used some paper he had lying around and made 50 completely different buttons. They look amazing, they look great, I like them. Just now I’ve started to move them around the world, or the contiguous United States. I sent out five small packages with two of them buttons inside. When I finally finish all of the summer activities I’ll add these to packages sent to the mail art crew.

Cappuccinoandartjournal.blogspot.com said…
I love my Ray Johnson bunny button!!!Thank you. Wearing it proudly.
July 8, 2013 at 6:48 PM