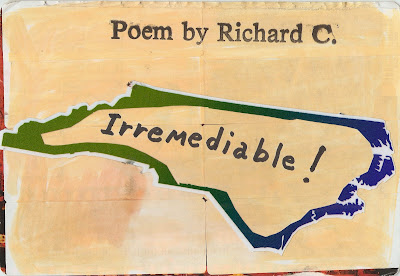 I never know what to do with Add and Pass projects. I look at them and can’t figure out how to put myself in there in a constructive way. Normally these projects end up as a big mess. Sometimes I come up with something and other times I move them on or put them in one of my big plastic bins. Since I’m not good at them, I’ve decided to do smaller more personal add and pass things. I’m calling these add and returns like most people do. I’m simply sending templates to specific people and then having each person to mail them back to me directly. None of this attempt at moving it around the world thing, those normally live on peoples’ desks for years and years. One of these projects is the NC project. Basically I put some paint on a large card, cut a North Carolina sticker to expose its guts, and then mailed three or four to NC folks. This is the one that I’ve gotten back and it’s from Richard Canard in Illinois. Richard is originally from NC. What I like about this card is that it feels a little different from other Canard cards. Most of his work has a slight smile in it, a joke, or a pun and this one has neither. Maybe I’m reading into this a little bit, but his one work poem feels like it contains some direct emotion from the Zen master. It is only one word, however.