Made With Student Stuff 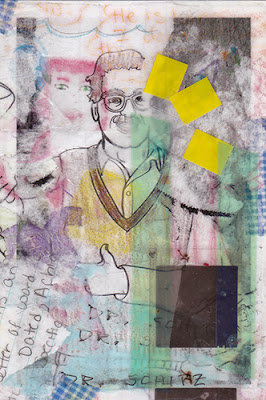 At the end of last semester I collected all of the “fun bits” laying around my office. Some of the items were extra credit assignments, others were handwritten things I found in the trash, and the others were my class’s finals. Since I have to grade a lot of essays at the end of the semester, I don’t have them do anything difficult days before I have to have my grades in. So, they’re forced to come to the final time and do a little drawing and coloring. I took this giant stack of paper and made dozens (maybe a dozen and a half) and made them into mail-art postcards. I sent them off and then went to Portland for a little while. The only image of one of these landing was this one card, which made me a little sad since I really enjoyed making these and I thought they came out really well. Either way, here’s the one that surfaced.