Results From the Mail Art Lecture. 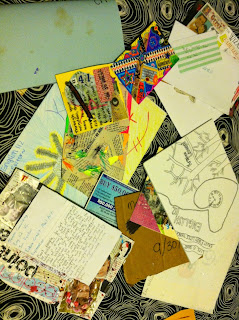 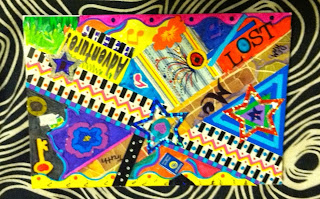 This past Tuesday I did a presentation about mail-art in front of fifty or so students at the community college. I’ve never talked about mail-art to that many people. Hell, I rarely get to talk about it at all. I don’t know anyone personally that has any interest in it, so to have a captive audience of students looking for extra credit, is really fun. Three / fourths of the students were ones that I told to show up. Since the event was billed as “International Mail-Art” I had to hit the international angle pretty hard. Of course they’re tons of folks from around the world making mail art, but I’m not sure it’s one of the main reasons people create. More than anything, I think all sorts of weirdoes from small pockets across the globe are simply looking to connect through the “network.” Having your work land thousands of miles away is just par for the course. But yeah, I love getting work from out of the country. There isn’t too much romance in receiving something from a small town in Nebraska but a card from a small town in the Ukraine, now that’s exciting. And now I’m off topic. I spent about forty five minutes talking about the people that I send to as well as all of the countries that have one of my pieces resting within their borders. I sent around some examples of work from all over the world, and named a few people specifically. More than once I mentioned Vizma in Australia and Carina in Finland. I attempted to name people from far flung parts of the world to balance out the audience’s interpretation of what mail art really is and where it comes from. Kim in Korea was in there as well as Vivianna from Argentina. The crowd seemed enthusiastic. They asked questions, they laughed, and more importantly they took all twenty-five or so of the “starter kits” I made. The kits were filled with random images and stickers and stuff from my collection. I also stuck in a few addresses of people willing to send back to them and some information about IUOMA. At this point no one has signed up for the site that heard the presentation, but I made more kits to meet the demand and I’ve already started to distribute those. Hopefully someone out of the group will create a card and mail it out. The alternative assignment, for those that couldn’t make it to the presentation, was to google mail-art and then create their own piece. At least twenty people did this, and of course, just like before, they did it for extra credit. Some of them hit a home run on their first creation…I was rather impressed. All of the cards above came from that alternative assignment. The picture with just one card was one of the most interesting of the lot, a great composition of exploding color. I'm going to make new cards out of the pile and send them around the world.

Unknown said…
I was fortunate to have been able to attend your presentation and found it very interesting . You were very enthusiastic and projected your love and excitement for your art. I can't wait to receive my starter kit since they had all been taken when I tried to get one. Keep up the good work !!
October 6, 2014 at 6:44 AM

zzzzzzzz said…
Oh don't worry, I have to make more of them tonight. I think I'll end up giving out maybe fifty of these. I hope at least one person creates something from the mound of things I've given away.
October 6, 2014 at 10:08 AM

zzzzzzzz said…
I'm trying to get the word out there but who knows if any of those folks are going to get excited about it. I feel divorced from any community near me so maybe it's wishful thinking to want to help create one?
October 13, 2014 at 10:25 AM