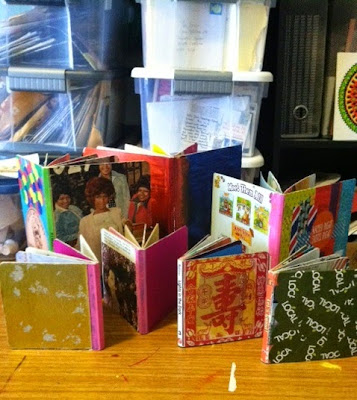 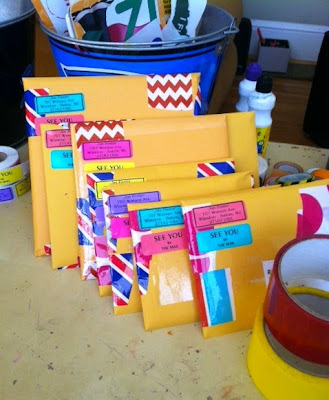 On a whim last week I decided to see if anyone was interested in some Collab Books. I went through the usual channels, both the IUOMA main site and a few of the mail-art sites on Facebook. Normally I get a few people interested in doing a book but it isn’t overwhelming. I thought I’d get maybe four or five people who would raise their hand. This amount would mean I would have two or three books floating around the world…no problem. I must have posted my announcement at the perfect time because everyone (a lot of people I’ve never heard of) wanted in. Someone must have sent something out on my behalf. The idea was to have me and three other people on one book. In less than two days I had 19 people that said they wanted to participate. I had to add a fourth person on the last book and worst of all I had to turn some folks away. For the past two days I’ve been gluing as fast as I can to get everything started. I glued right after work, right before bed, and then started again as soon as I got up this morning. Right now everything is glued up and packaged, all ready to go. I have six Collab Books and one One on One. I’ve got them going to Ireland, UK, Chile, France, Pennsylvania, and California. There’s another one in there I can’t remember. Hopefully this summer I’ll start to see them come back home.

Cappuccinoandartjournal.blogspot.com said…
How fun! That's a lot of books making the rounds! Have fun with it....and looking forward to seeing the results...
March 28, 2015 at 3:26 PM

zzzzzzzz said…
Thanks Lynn, I really didn't think that many people would get back to me about the whole thing, truly surprised.

I will post all of the images of the books as they come in. I can't wait to see what people are going to do as well. Hopefully then come back in somewhat of a timely fashion, couple months maybe?
March 30, 2015 at 6:08 PM