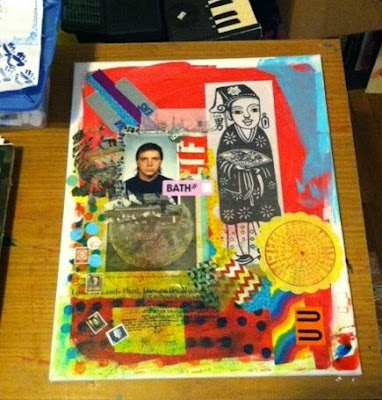 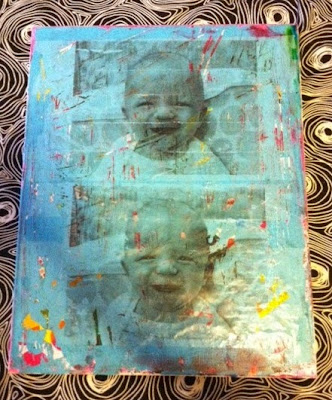 I’ve always had A.C. Moore’s back over Michael’s in the whole craft store debate. I mean I have a preference for one but I’ve started to wane in my enthusiasm. A few recent trips to Michael’s have confirmed that they often have better sales on random garbage, but A.C. is closer to my house and closer to a record store, so I’ll always go there first. While walking around the other week (40 % off coupon in my hand) I noticed that packages of pre-stretched canvas were on sale. Up until now I’ve bought all paintings and just painted over them if I wanted a canvas, but something called out to me, “why not.” I grabbed a five pack, use my coupon, and then walked out. A little side note here, rarely do I encounter another man in the store. It’s always forty or fifty year old women with “southern haircuts” buying up handfuls of fake flowers or puff pant for t-shirts. Never a dude, sometimes School of the Arts students, one time I had a Kat Lamp sighting. For a while I had one of the blank canvases sitting on my table in the back room, not sure what to do with it. It just sat there. Slowly but surely I started to add a little thing here, a big thing there. It was a slow process that developed over a couple of weeks. It ended up becoming something similar to what I normally do but on a bigger scale. I can’t say that I like it. I can’t say that others liked it either, I offered it to folks online but no one was interested. Well…one person was interested but he’ll take anything you’ll give him. In the end I decided to keep it and see if I could start a collection of similar items through the summer. I’m sure I’ll end up dumping them at Goodwill this summer in the dozens. The other I did for some close friends who have a fresh baby. Not too long ago I made a baby book of their child with some fun stuff in it and they seemed to like it. Before that I made some magnets. They never asked me to make something larger I just went for it. Having a purpose and reason to create something is rather exciting to me because I know it’ll get done. Although the finished product is rather simple it’s made up of a lot of layers. Underneath the blue paint is a lot of crazy tape, too much tape…too much color. I painted over the tape when I didn’t like the look of the whole thing, thought it was painful to look at it. I painted and I dabbed, I painted and I dabbed, for three or four layers of color. I made the transfers of their child’s face in the sink and then stuck those on top. The images of the baby are too light but they blend in pretty well. The top image doesn’t look as good as the bottom one. I told them they could throw it away if they wanted to. I should probably deliver it to them? They’re too nice to say they don’t like it, but if they do like it that’s great. It’s not that creative or grand or worked. It was made to make them smile which is something I don’t do all that often. It was made for decoration which is something I’ve never done, but I liked the challenge. It was all how they would perceive it.