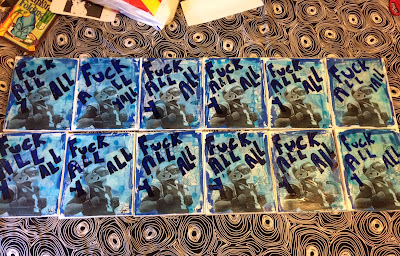 I’ve been on a crazy making run of late. I haven’t been doing much “music” or even writing, just a lot of trashy collages. A friend in Virginia enlisted me to create a couple of collages of iconic musicians. The three collages were painfully simple and focused almost solely on the power of the figure. I created a David Bowie one, a Joe Strummer one, and Woody Guthrie. There was little to them except for the image…just some paint and a lot of layer of mod-podge to make them shine. They look neat (I’m glad he liked them) but it wasn’t something that required a lot of thought on my part. This is something that comes up over and over again. I have two different modes for my trashy collages, I have the ones that I like, the ones that are painfully “messed up” where the figure slides to the background, and I have ones where the figure is right up front. No one cares about the more abstract ones. I honestly can’t give them away. The really simple ones I reserve mostly for my friends kids. I dial back the strange and highlight their child in the foreground. Only once in a while do I make something completely asinine out of their child’s image and I only do those after I’ve sent a handful of other collages. Some parents are more inclined to enjoy a picture of their child with someone else’s body riding a tank down a European city more than others. It’s honestly easy to pick out these people. On a whim last weekend, I decided to make some Carolina Panthers themed 8x10 collages. It was a mix of the worked and a mix of the obvious. The background has a little abstraction to it but the eye gravitates to the wonderful Cam Newton. At the very top of the image is a line reading, “Fuck All Y’all” that was inspired by all the idiotic shit the MVP quarterback has had to put up with this season. Why not a little grit? The trick was to see if people were interested in the subject or the art behind it. When I posted the image I wrote that I’d give away as many of these as I could. Honestly, if 50 people wanted them I was going to make 50 of them. Each one costs me about two dollars in materials so it isn’t a big deal. The eight people who raised their hands and were interested are big Panthers fans. Mostly they’re people I watch the games with every weekend- people that I’ve watched with for the past six or seven years. In the end I made 12 of them, kept one for myself, and have three left over. I’m hoping that I only need to mail one of these to keep my costs low. I doubt I’ll see any donations from my meager effort. Each one took about an hour or so of creation time and they were a lot of fun to make. It would be nice to see where people end up putting these and how public that spot actually is. Foul language is a little bit of a deterrent for most people.