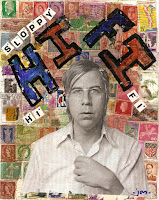 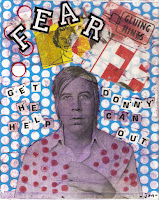 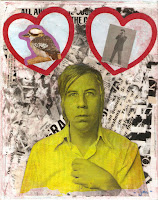 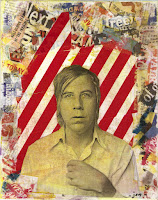 I was sitting at my desk on the last day of the semester. I was a little bored since I had finished all of my work a couple days before. All I had to do was answer angry emails from students and little else. I was also stocking up on some of my more creative endeavors, printing off a few things and thinking about what I was going to work on over the break. Out of the blue I decided I needed to make some John Vanderslice collages, so I printed off some images.


Vanderslice has been my primary musical influence for the better part of two decades. Honestly, I feel that I’m responsible for a very small portion of his fan base. Through my enthusiasm I have spread the man’s gospel to all serious music fans I know. Some of those people have moved away and hopefully told more folks about the music. So…my passion may have spread to a lot of folks that don’t even know it. Maybe they’ve told other people, and so on, and so on, and so on.


I ended up making four 8x10 collages with the same picture. I knew I wanted to work in Donny (a character in many of JV’s songs) into one of them. I got that done. I also found a sticker of a kookaburra bird in there, which is something I shouldn’t have had. Thankfully constant thrift store visits means I end up with some strange items. I was pretty happy with the results. I posted the images of them as I finished things up. A few genuine JV fans commented on what I had created. One suggested that I send one to him. I guess people want images of themselves, right? I went to Facebook and sent him the following message with the scans of the four collages.


“Just got out of school and I've been making a bunch of collages. Made a few with your visage on them. Let me know if you'd like one and I'll mail it to you.”


After sending him the message I thought how weird the gesture might be perceived. I’m just some weirdo on the other side of the country making artwork out of his face…that has to be a strange feeling. I’m sure something like this has happened to him before, still weird though, right? While waiting for his response I thought about the peculiar nature of such a request. Thankfully he didn’t seem weirded out, or at least not enough to avoid my message.


He wrote back, “hey jon, i would love that!!!” After a bit of back and forth about which he wanted me to send he wrote, “yes, please send me the ones you'd like me to have, that would RULE!!!! thank you!!!!”


I thought about it for a little while, wondering which I should send him. My initial thought was to send him my favorite. Then I went to thinking about sending my favorite two. Then I thought about all of the time I’d spent listening to his music, driving to shows to see him live, and how many people I’d forced to listen to his music. So yeah, I’m going to send him all four in hopes that he likes them. What does one do with something like this?

Gerald said…
I think you enjoy the fact that someone who has inspired you is honestly touched to see tangible evidence of what his work has meant to someone. A man who wrote a song about his tape machine is going to get the inspiration that produced these. So you send them (I'd say all) and feel good about it - and that this encounter turned out a bit less... strange, I guess?... than the John C. Reilly thing (as I recall).

zzzzzzzz said…
@Amy - I think I'm going to continue this, to at least send to friends who are a fan of his.

@Gerald - I'm sending them all!