I Made Seven Inch Covers for Cactus Black

on April 26, 2018
I say yes to any creative assignment people are interested in me doing. Don’t worry, it’s not a lot of work, rarely do people ask anything of me. Namely I’m talking about people outside of the mail-art network. Mostly these folks are friends who want a collage of their loved one or something for their own creative projects. They’re always poor working creative types too, so rarely do I expect anything out of them. In other words, they don’t pay. It’s a punk rock I’ll help you out if you help me out sort of thing. If I like the person and I like the project, I’ll not only say yes, but I’ll take on the project with glee. Doing something I wouldn’t normally do makes me have to problem solve; it increases my vocabulary for making trashy collages. Plus, I get to collaborate with people in my area (mostly) which is exciting.

Mike Tyson is one of those dudes, a guy that makes good music and is a nice hang. I feel like I’ve spent a lot of time in backyards talking about music with him. A couple of those times we might have been slightly drunk. Mike even took one of the images of Tucker to the Taj Mahal with him, posed it in front of the iconic building, and sent me the evidence. So…when he starts a sentence with, “Will you…” I say yes. Anything for the man in the black trunks.


He came over to the house to discuss projects. This was after many texts messages about what he wanted or what he thought he wanted. Since my “art vocabulary” isn’t that vast, I wasn’t able to effectively say what I could do. Pretty quickly we discarded his ideas for something much easier for me to complete. The idea was to create some special seven inch covers for an exclusive release his band Cactus Black, was finishing up. The covers I was going to work on would be included with a new official tenth inch release. It was a multitier thing; you know if you pay this much then you can get this other thing included with this main release. It seems to be the way bands can make their money back these days. Record collectors like those sorts of special release things, or at least the dorkiest ones.
I ended up making 16 different collages, all on bingo cards. I then glued them to the white covers and that was it. All of the covers were ripped tape collages. Mike said he saw the work I had at Aperture (way onto way) and got in touch with me. Those were tape rips, I like making tape rips, so I made a bunch of similar collages for the seven inch. Most of them had figures in them and most of them had out of context phrases attached to them as well. I worked on them little by little over a few weeks, scanning and then sending them to Mike for approval as I finished a new batch.  He seemed happy with them.


I liked the stark contrast between the white background and the rectangle card. The cover worked as a frame for the collage. Your eye went to the excitement. None of the images were themed to the music on the record or his project in general; it was just what I was making at that time. On second thought, I might have tried to match the tones more. At least it was a unique idea, something I could see an emo band doing in a small edition in the mid to late nineties. I kept thinking of that Post-Marked Stamps seven inch series, it felt like something they would do. That was my inspiration. 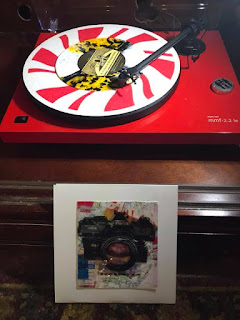 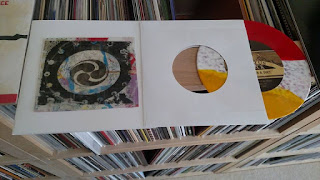 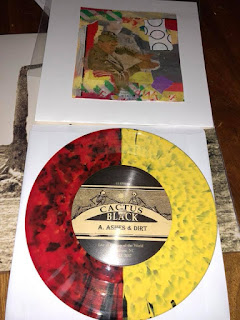 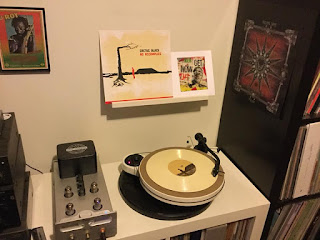 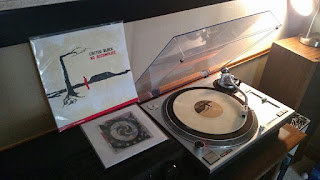 Mike showed up to the house and picked up his covers. I made 16 even though they were only going to sell 12. He seemed happy with them, I don’t really know, two of them were really crooked.  Like the gentlemen that he is he brought me the new ten inch, a copy of the seven inch, and forty forever stamps. Stamps are as good as payment in my world, so sweet.
A couple weeks went by and I hadn’t heard about the release. I went to Cactus Black’s Facebook page and saw that they had not only been put up for sale, but folks had them in their homes.  The bands page insisted that people share an image of the seven inch with the group. People actually did this; people actually shared their limited edition seven-inch.  Five people did this! Like an idiot I thought I’d know the people who had purchased the seven-inch, I did not. So there, in people’s homes, around their vinyl rig, was one of my collages attached to a record. Normally when I mail things, people know who it’s coming from. Mail-artists know the game. Friends know that I send weird shit to them every once in a while. In other words, if you have something of mine then you probably expect something to show up at your house at one point or another. If I know you well and I haven’t sent you something in the mail, then we aren’t really friends. Strangers aren’t my usual audience but I’m excited about them having to see that cover and imagine how I made it.


You should go listen to Cactus Black. https://cactusblack.bandcamp.com/

Tone Clothes For Phone said…
Awesome gadgets for sale at Tone Clothes For Phone, find the wide range of your desired cases, covers and accessories in USA. Our online store offers one of the best designs of cases and accessories, which have unique features such as heavy duty, waterproof, 360 rotation, bike handler, and much more. For more details visit tonethisphone.com