No Laughing in the Little Library

I make too much stuff. 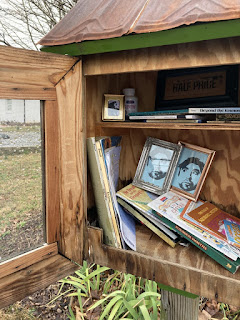 I have blocks of “making time” scheduled throughout the week. I have blocks of making time at work, upstairs in the main making space, and painting outside. Through the week, I’m continually shuffling things from one of these three spaces. If there’s time available, I like to work on something. There’s never an issue of inspiration with what I make, I simply inhabit one of these spaces and start chipping away at things. If the mind is slightly blank, I can put addresses on envelopes, rip up images from magazines, or do the massive amount of clerical work that goes with mail-art. There’s always something to do and I try and do it as much as humanly possible…all the time.


This has led to something of a problem. I make too much stuff. The collages are easy to get rid of, I just put those in envelopes and send them to folks. Sometimes I send to mail-art shows just to keep from burdening my correspondents. In moments of intense creativity, I mail collages in large envelopes with a lot of broadsides and random garbage included. Doing that sort of thing clears up a lot of space.

Thrift stores haven’t helped with this problem. Thrift stores have fueled my picture frame purchases simply because they’re there, and they’re cheap. I have tons upstairs that I put collages, broadsides, and Frankenstein like creations in. Normally I save these for unwanted home deliveries in the Winston area, but friends can only take so much. They don’t want this stuff and I can’t afford to mail all of it out, so it collects in piles. Side note: people love to tell me I should sell my things, but they never follow up with how, let alone buy something from me. 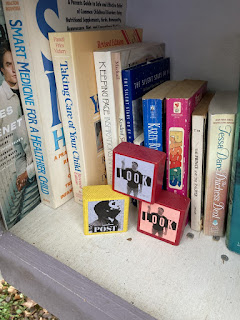 It never occurred to me to start putting items in those Little Libraries around town. You know the ones, small mailbox like structures in front of houses where people dump unwanted manuals for a computer that broke years ago…. yeah, those. Never thought of it, not even once. I drive by quite a few of them while going around town, they’re pretty much everywhere, and it never occurred to me.

The first round of things I delivered were mostly printed images of my face. (This past week I started putting collage packets in there too). These were, reduced in size broadsides that I’d cut up and fit into tiny frames, some of them less than three inches tall. Frames from the Mission on Trade Street is less than a price of a stamp. I first dropped off a big batch of things on the west side of town, simply because of the ease of getting out of my car. I could pull over on the side of the road and not get hit. The next week I came back and everything I put in there was gone. I printed a list of other little libraries and started putting things in five or six different ones. Whenever I’d go back the next week, everything would be gone. A whim had turned into another ridiculous obligation.

At first I thought people were taking them out of the boxes, and tossing them in the trash. “This isn’t 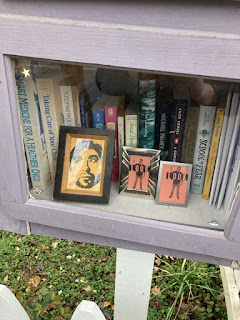 supposed to be here!” I’d imagine them saying. This fear came exclusively from reading the neighborhood Facebook group. The amount of people on there that do not care for joy outnumber the ones that do. Take my image out and use the frames, I don’t care. If anything it’s a frame donation. A couple weeks ago someone posted specifically about the libraries on the neighborhood page. It seems that someone in a black pickup truck was going around the neighborhood cleaning out the libraries. Many, often pissed off people, were pissed. Everyone had an opinion about the little library thief, but no one mentioned my pictures. I kind of wanted them to mention my pictures. While it’s nice to get rid of stuff, the main thrill is imagining what someone else will make of the gesture. I’d love to see video of someone opening up one of those little doors, and seeing an image of my face looking back at them in a tiny frame? If I get a chuckle, just one chuckle, it would be worth it. Of course I’ll never know if I get that chuckle…that’s the joy of the anonymous gift.

As soon as someone mentions my pictures I’ll have to stop, what fun will it be then?

Dear Jon, It's me, Annie Krim-Déjean from France. I just read your letter, I like these little books houses, we have also in France. I always have a look in them with the hope to find old pictures, old books, sometimes a police book. I often am disappointed, but if I could find what you leave.... Happy people !!! Be safe and happy! Annie 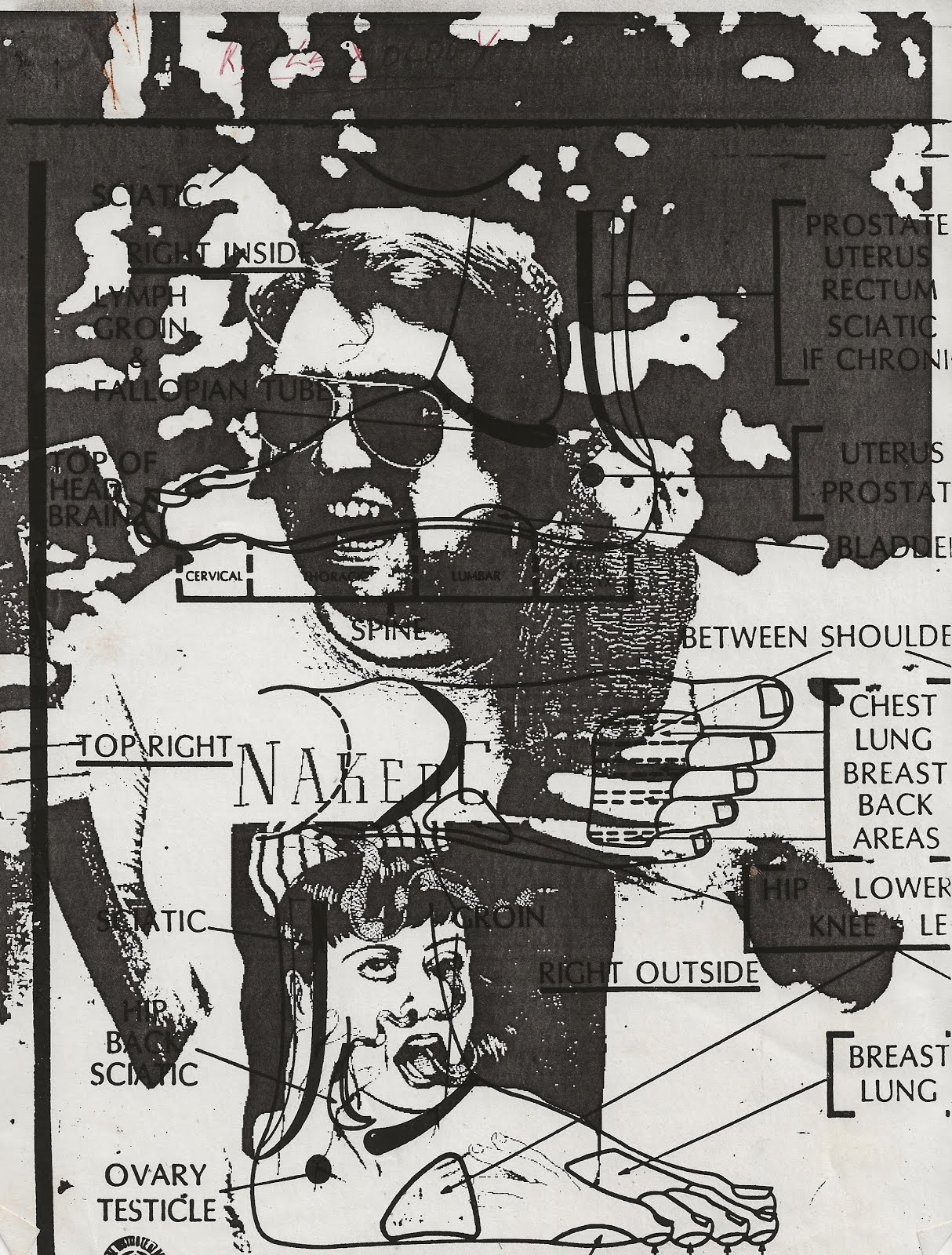 No Laughing in the Little Library