You Can't Hurry A Paper Collage

Looking back at the first collages I moved through the Network, I’m not impressed. Those first ones were sloppy and silly, made up mostly of just a few parts. All of them were paper and glue and maybe a little marker or paint. Those early collages weren’t good, but I needed a starting point. It took an accident for me to discover tape transfers, which became an infatuation for me. I like making tape based collages. More importantly, I thought there was something there, something worth pursing over and over again. It took three years and a lot of playing with tape before I made something I liked. 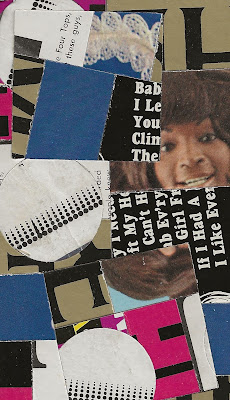 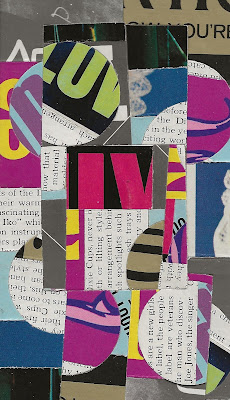 One thing that eluded me were decently made paper collages. Once I started messing with tape, I mostly avoided straight paper collages. I mean I dabbled in paper collages, but I never made anything I thought was particularly good. Essentially, I made re-captioned pictures in the spirt of the meme. They were always funny or surreal or a little bit of both, but nothing close to a fully realized collage.

This summer I spent a lot of time upstairs working on things. Most days I put in three or four hours logging what I had received, ripping paper for transfers, pre-making envelopes, writing responses to folks, putting picture print offs into thrift store frames for those little libraries, and gluing things together. I can always go upstairs and find something to work on for hours at a time. There’s always something to do.

Part of my mail-art process is going to thrift stores, it’s what happens before I work on things upstairs. There’s a lot of steps to making stuff that doesn’t actually involve the physical putting together of items. You have to think about those items and you have to buy those items before you can create something new. Thrift stores are where I get the vast majority of my materials, and strangely, my inspiration. You walk around and think about new creations. Thrift stores are where I like to brainstorm.

I was walking around one such place in Lexington North Carolina. It’s a Habitat for Humanity store, not always the best place for what I’m looking for. It doesn’t help that the staff is mildly unfriendly and you have to endure tons of contemporary Christian music. What I like most about the store is that there’s an upstairs that runs the parameter of the shop. The middle is open, allowing you to look down on the first floor shoppers. The feel of the place causes me to come back as much as what they sell. Anything feels better than the super-practical layout of a Goodwill. Books are two dollars a bag and sometimes there’s parts and pieces for next to nothing, sometimes…not all the time. Frames are often at a good price too.

Anyway, I went through the books and saw an older lady looking at a large pile of records. A Supremes’ record was sticking out from the top of her pile as she thumbed through them on a dingy couch. Nothing to get too excited about, those records are almost universally trashed, both because people listened to them and because they didn’t come with a paper sleeve. If 99% of all thrift store records (I believe this figure to be true) contain terrible music, then 99% of that 1% is trashed, completely unplayable. I walked over to the boxes of records not expecting much. Looking at thrift store records is more of an obligation than a joy. I quickly pulled out a pile of mid-1960’s titles, all originals. Every record was completely trashed. I ended up buying five or six anyway, just because I liked the covers. I would have preferred them to be in good shape so I could listen to them. At 50 cents each, I could make unique postcards out of them without much fuss. I bought a couple Supremes records, a Dixie Cups record, and the Kingsmen. The lady on the couch had a massive pile as I walked away.

Much like stumbling across the tape transfer method many years ago, I stumbled across making relatively satisfying paper collages. The records were quickly discarded and the covers cut into pieces after salvaging big chucks for postcards. They sat beside a large roll of industrial sticky paper I bought at The Scrap Exchange a couple months before. When I purchased the sticky paper the clerk asked me what I was going to do with it. At that time, I didn’t have a clue. It was like two dollars for the roll, why not? I ended up laying out one of the pieces of sticky paper on my work table. I’d then take the strips of record cover and push them together on the sticky paper creating a foot-long collage. From there I cut circles into the strips over and over, replacing them with circles from other parts of the foot-long collage. Over time these foot-long strips created a pile on my desk, which I made for no particular reason.

I then cut up the foot-long strips into smaller strips. I mixed those new strips up and then stuck them to a different piece of sticky paper. I did this over and over again. I cut more circles out of the new strips. I did this over and over again. Over time I started to see something entrancing produced from this process. I felt like I was making a quilt of tiny bits of fifty-year-old cardboard.

What I ended up with worked well for postcards, most of which had a similar look once they were cut to fit in an envelope. I scanned the ones I thought were most interesting, the ones where you could see a face pop up in the composition…maybe a word hidden somewhere. Some of them I put into frames. Some of them ended up looking like “collage sculptures.” These sculptures had a shape that wasn’t the usual square or rectangle. 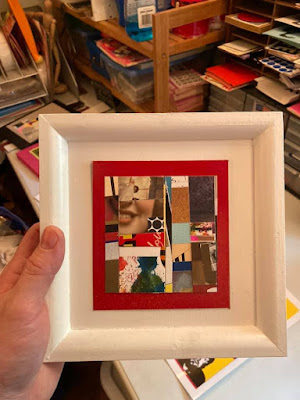 To me, I liked the ones I glued to painted board frames. They were a collaboration between me and my dad who made the frames for me. He made about ten or twelve in various sizes. I spray-painted them and then cut the collages into the shape that best fit the boards. The leftover pieces went into the next collage. The board framed collages I put into my save pile upstairs. I have no idea what I’m going to do with them but they’re in a plastic bin in a small room that is quickly filling up with stuff. The ones I put in frames I gave out to a few folks. Whatever is leftover will end up in little libraries around the area. 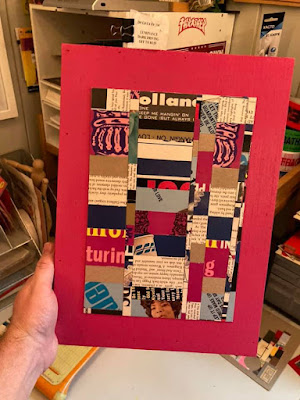 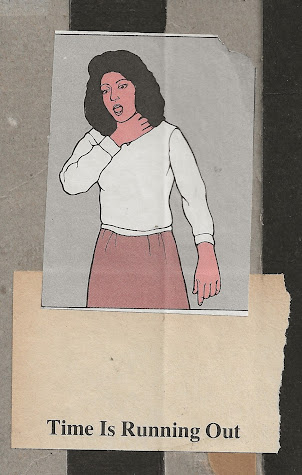 NPR's Eddie Garcia Made A Record and I Made An Image 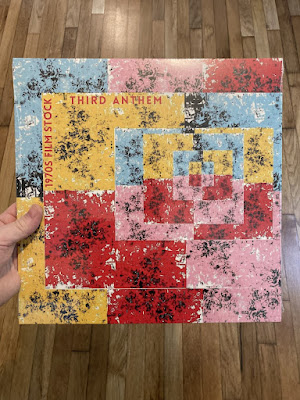