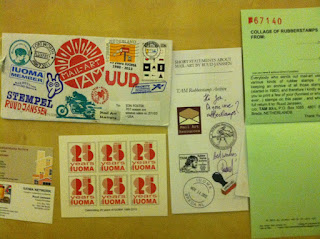 The International Union of Mail-Artists turns 25 years old this coming year. I’ve been with the group for over two years, so I have a long way to go to be an authority on this whole mail-art thing. Yesterday I received this card from the IUOMA’s founder, Ruud Janssen who’s based in Breda, Netherlands. I don’t know anything about that town, but it just sounds like a nice place. Anyway, Ruud is trying to get a lot of things going for the anniversary. He’s sending out items like this, and even hitting up members to come up with ideas for the anniversary. I think there was some talk of a giant meet-up, or an exhibition…I’m not really sure. If I can contribute in anyway, I hope to get a show, some show thing going for Winston sometime this summer, which would be perfect timing. On a side note, he collects stamps that members create. Currently I’m waiting on a few stamps that I created of my own wonderfully sculpted face. I should get these by the end of the week and then I’ll send some impressions to him.