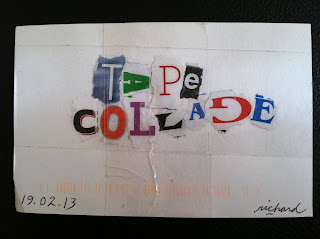 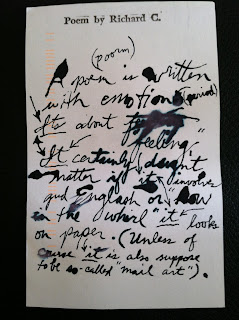 If you’ve been sending mail-art since the 80’s you’re often seen in a shimmering light. If you’ve been making and sending mail-art since the 60’s…whoa! If you’ve been making mail-art since the 60’s and had a relationship with Ray Johnson, you’re royalty. Richard Canard (his last name alias is so subtle and great) is one of those guys. Simply doing it for that long doesn’t seem like a grand accomplishment, but doing it for that long and doing things well, engaging creations very well, now that seems like a great compliment. Richard is one of those people that do it well, great even. He’s the Zen master of mail-art. Like his alias, he’s subtle but a constant prescience. He’s a personality without being there. Everything that he sends is thought-provoking and often fun, smart-assy and filled with a sharp wit. In other words, it’s exactly the type of perspective that I’m interested in. He’s a serious jokester. He’s a Davidson County native…I can’t get past that little fact. Anyway, I try and post whatever he sends to me because when I first get them in my hands I pause for a second or a minute.