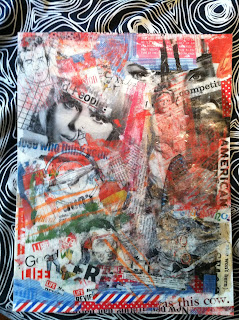 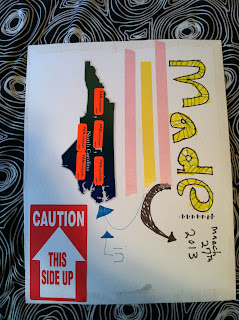 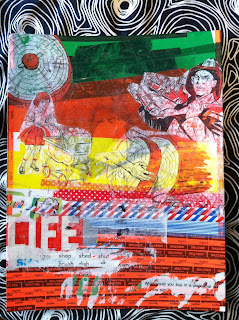 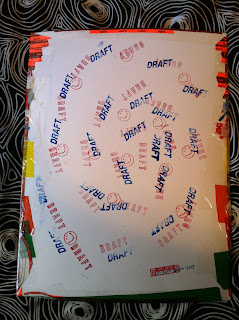 Sometime last week I realized that I’d been sending out way too much mail-art. I guess that’s not a real thing, but I wasn’t getting much back, and when this happens I decide to work on other things. I’ve sent well over one hundred things this year, and it’s only the beginning of April. It feels like I’m trying to stay ahead of the days, and do the Mail 365 thing without really trying. If that’s the case, I don’t have to send out any small cards until the middle of April. So yeah, I decided to go away from the smaller items and work with the larger. Initially I started doing this with the intentions of showing them to some people, not to mail them. I’ve heard three different groups of people promise a show or something like that, but none of them has come through. At this point I have around twelve or fifteen items collected in a folder. They’re just sitting there, waiting…waiting for something to happen. Actually it doesn’t really matter if anything happens because they’re the only tangible proof that I make things. I’m sure that I’ll get annoyed with having them around and I’ll send them out to folks, but until that point, they’re just resting. These two items are a product of that same process. Well, they’re pretty much like the rest except these are slightly larger, I think they’re both 11 x 15. The other ones are the next size down for watercolor paper. I use that paper just in case I decide to cut them up and mail them out. Maybe I’ll do that, hmmm? Just for clarification, the sparse images are just the back of the collage. It seems like a waste to have all that white space and not actually use it. Every single time I make these bigger pieces, I do something on the back, just fun for fun. In all actuality, I don’t really like these two. One is just a free for all of images, no real pattern, just a splash of color and vintage images. It’s what I do, but it’s not anything arresting. The other I tried to pay around with some stickers to give it a better feel, but it only ended up looking like a construction barrel on the side of the road at night. It’s just too much, too much color, too much bright! Oh well, not all can succeed and not that any others do, but this one seems more like a glaring failure than others. It will go to the pile with the others. Who knows what will become of them?

Karen Isaacson said…
I find big pieces really challenging. I'm so comfortable with the postcard format. I hardly ever go bigger than 5x7. I also think failure is a word that should be struck from our vocabularies. I learn something from every single thing I make, whether I like it or not. The more I learn, the better I get. Plus I'm often surprised when people gravitate toward my least favorite pieces. you just never know.
April 4, 2013 at 11:02 AM

zzzzzzzz said…
I with you on your last bit, Karen. Often I find people interested in the things I'm not that proud of, things that I sometimes despise. It's strange how that happens.