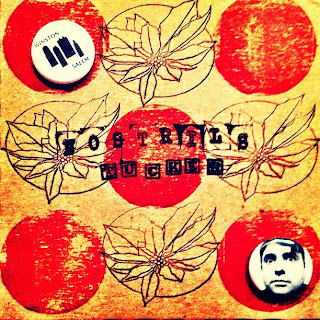 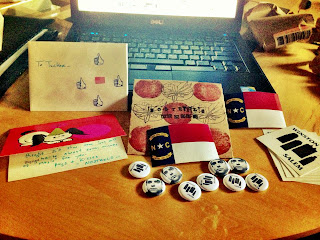 I’m not exactly sure if this counts as mail art or not? I mailed the work…so I guess it does count. What we have here is an EP by my “band,” Nostrils. It’s basically a way for me to put together sound and act like a musician, a musician without any technical knowledge about music. I can’t tell one not from the other and I don’t know a single chord on any instrument. I approach making music like I approach mail-art, as an outsider interested in making my noise and nothing else. Punk roc, fuck it, DIY, sort of thing!!! All of the songs that I write are supposed to be silly, or at least the ones I put out to the public. Every song is a one-liner improvised. Never once have I written any lyrics down, I just go for it. When I do the tape and rip method, I go for a similar aesthetic-rarely is there a plan. For the songs, I do write down some ideas, maybe a word or two, but the preparation is minimal. I guess this is like my constant hunt for odd images to make my collages from? One person has been more than supportive of Nostrils, and that’s Tucker. His enthusiasm, considering everyone else’s lack of enthusiasm, is staggering. I once walked up to him and he started singing a song back to me, like it was an actually a tuneful song. I wanted to honor Tucker by making a few songs just about him, so that’s what I did. I ended up with one intro speaking piece, and five very short songs about the man. The whole thing came to six and a half minutes. It would have been longer, but I didn’t know all that much about the man. I wrote songs about his height, his haircut, and especially his love of soccer. The soccer song I thought was quite amazing. I packed the whole thing up and sent it to his home. Of course the packaging I spent a little time one, collecting items from here and there. I guess this last part is what makes it a mail-art item. Anyway, I wanted to share this project with everyone. I’m going to post the MP3’s as soon as I can find a spare hour or two. www.nostrils1.bandcamp.com