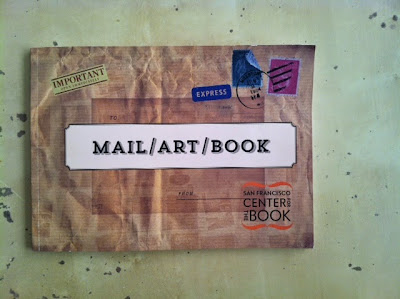 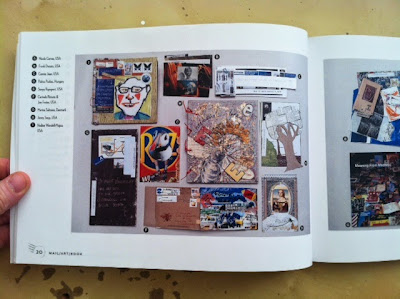 Unfortunately the Ex Postal Facto meet up didn’t’ happen when I could make it all the way out to San Francisco. All of the images coming from the event made it look amazing, a lot of fun, it would have been great to go. It did seem like there were a lot of older folks there, which is troubling, only because I worry about the health and longevity of the whole project. I want it to continue so we need more new blood. It could have simply been a time and money issue and not a lack of interest from folks younger than the first or second generation of mail-artists. The main promoter of the event recently posted something about an official catalog off the event that I was thankfully able to be included. I sent several things to Carmela in California and she turned those items into a book. Before I saw the catalog I saw a video of someone wondering through the exhibit and there it was something I made behind glass. I felt really good about this you know, having something behind glass and thus important. Other than a few people here and there saying they liked what I’ve created, I’ve heard nothing about these things I’ve spent hours making. (Part of my motto is strictly based in the punk world-since no one cares what you’re doing, you might as well do it the way you want to. No one cares so I continue). Having someone actually notice was a strange feeling. The “official” validation that something I made was indicative of this thing called mail-art, felt great even if it went against my whole reason for creating. It was a nice thing, a fulfilling thing, a conflicting thing. It took me a while to build up the courage to buy the catalog. One side of me was saying “Don’t do it, just keep moving forward” and the other side of me wanted a trophy, some physical remnants of my mild greatness. I called the SF Center of the Book and ordered with shipping, my forty-eight dollar copy. “Who knows, this could be the last thing like this that I’m ever in,” I kept telling myself. In two days the book was at my house. It’s a thin volume, much thinner than I thought it would be. Some heft for the cost would have been nice. Of course I went directly to the index to see my name. There on page twenty was what Carmela and I had created. Thankfully the main piece was one I liked, a collage of a bunch of Japanese characters. Hopefully there isn’t anything too untoward in there. I would hate if I unintentionally created a racist screed or formula for a hydrogen bomb. Hell, it could be Shakespeare…no, that was with monkeys. The rest of the collages that made up the book aren’t represented, but I can see the address portion of the card in the book. I wish I would have spent more time decorating this section but I didn’t know it would be included in such a thing. At this point I was still using cut in half blank, cardboard cards from the craft store. In the top left corner was a simple black and white address label and a red honey bee stamp directly beneath. It looked uninteresting to me. I should have used more stickers. I should have used more stamps. At least the main image is one I adore.

B. Lee said…
I'm glad you went for it, with getting a copy! I made it out to SF for XPF. It was a wonderful mix of new & old school mail artists. There were indeed a lot of young folks in attendance. Does my 31 count in the 'young' department?!? :)

This was the first time that I, too, was "behind the glass". Quite the feeling. I understand the confliction, also.

At least you were able to attend in this capacity. XPF will go down in history and the memories of all involved as a highlight of the mail art scene.

Cappuccinoandartjournal.blogspot.com said…
Hey Jon -- I agree with B.Lee (whom I met at XPF). There were lots of the wonderful old school mail artists at XPF but I think the event was a mix of a lot of ages.
The book may seem a bit pricey but it also helped defray some costs of producing the event (as I understand it) and also contributes to the wonder SF Center for the Book. I wish you could have come to SF for XPF because really think it was amazing and every single person I spoke with about it was delighted with the whole experience.
April 3, 2014 at 2:26 PM

zzzzzzzz said…
Hopefully 31 is still young, since I'm 33...I don't doubt there were a lot of younger people there, it just seemed from the pictures that it was mostly an older crowd, which is fine, I was just worried about the longevity of the whole thing. It seems like it's going to continue then. The glass thing, yeah weird for sure, a nice feeling but still weird.

Pamela, I'm glad it was a good mix. Sometimes I feel like I'm on an island over here since there aren't a lot of outlets for like minded folks. I've gotten a few people to send things but they've always flamed out instead of stayed with it. No NC mail art gatherings unfortunately.

The book was pricey, but I was happy to support both the event and the center.

Hopefully I can make it if they have another one, I really wish I could have. Too bad it didn't happen in June