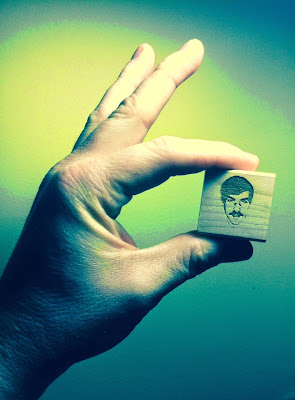 Earlier in the month I posted some art with my friend Tucker’s visage in it. In those three weeks, things have really gone nuts related to that project. The book of student generated Tucker images was the first step in my whole “Tucker Fan Club” idea. First off, I have to answer a quick question that people always ask me, “Why him?” My response is always the same, “He’s nice, and he really likes it.” The second part of the “program” was to simply send out stickers to friends and mail-art associates. I hoped that they would send me an image of where the sticker was affixed in their hometown. The last part (that I’m willing to divulge publically) I printed off a lot of paper Tucker heads, and I’ve moved them around the world, asking mail-artists to create collages out of them. Slowly but surely, about two week ago, I started to get back some collages. On a whim one day, bored at my desk at work, I decided to set up a Facebook “Tucker Fan Club” page. There was little to no thought about where this was going to go, no direction whatsoever. I set it up and then started to add folks. By the end of the first day I had almost 200 “likes.” To respond to this interest I started to scan everything that I had with his face on it. Knowing that I had to keep people interested, I made crude images to put online in between the much better mail-art I was receiving. Since that first day, I’ve done some interesting things around the site. 1. I have created two contests for altered Tucker images. I’ve given the participants handmade (by me) magnets. I couldn’t get five takers for the second round. 2. I’ve given an interview mostly about the fan page to a weekly paper in Greensboro. 3. I’ve sent out dozens of stickers to strangers all around the country who have some connection to Tucker. 4. Strangely enough, Tucker’s mom is the biggest fan of the whole project. She’s a very supportive lady. 5. 262 people have liked the project. Above is a rubberstamp I had made of the man’s face.

Unknown said…
Of course I'm his biggest fan! That just goes without saying. And now jon foster, I'm one of your biggest fans! I enjoy all the places Tucker has been and look forward to his next adventure each day. Tucker makes a good subject and you are the ONE who picked him. Keep em coming! Love, Ma
January 30, 2015 at 11:21 AM