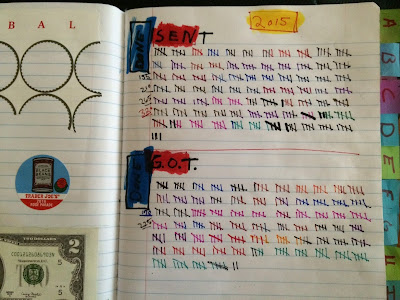 Every year that I’ve done mail-art I’ve kept pretty good records. I record every piece of mail-art I send to people and every piece I receive, jotting down these numbers in alphabetical order. I do this to make sure that I keep a balance with who I send to and who sends to me. This system has worked pretty well. At this point I think I’m on my second or third record keeping books, which is a nice creation itself. Looking at this year, I’ve sent out 378 pieces of mail-art. I’ve received 357 pieces. The received amount is pretty much spot on, but I know that I’ve mailed a lot more than the 378. I only count the items that I send to other mail-artists, because they’re kind of on the hook for sending back to me. Things I send to friends aren’t usually put in the “sent” tally simply because it isn’t an exchange. Mailing to a friend means nothing comes back my way, so it’s outside of the system in my mind, thus not a mark. If I were being completely honest the real number is closer or slightly over 400 pieces. If I only sent those items to mailboxes in the United States I would have paid $196.00 in postage. In that rather large 378 I have sent packages of goodies, collaborative books, and random and unaccountable ephemera. It’s an expensive hobby, one that I’ve given more attention to every year since I started. At the start of every year people make resolutions. I don’t make basic life resolutions, but I’m making mail-art resolutions. Here are a few mail-art related resolutions that I’d like to keep in 2016. 1. Scan and post all of the images of the 1979 project. I’ve already gathered as much information as I could as well as posted what I’ve found online, now I just have to scan, scan, and scan. I will start scanning later this week. 2. Get back to playing around with tape. In the past few weeks I’ve been making a lot of rough images online, printing them, and then painting over them. I haven’t sat down and worked exclusively with tape in a couple of months. 3. Collaborative books. Although it’s frustrating to send a collaborative book or pamphlet or whatever out into the world and then never see it come back (this happens half the time) it’s a giant thrill when it does. Recently I’ve been doing a lot of pamphlets made out of paper I found in a classroom trashcan. Keeping them one to one generally means a higher rate of return. I’d like to do more of these as well as collaborative kids board books I find at thrift stores. I like the way they look on a shelf. 4. Learn more collage techniques. Everything I know about making these little things comes from my own discovery. I have no training. I have no technical knowledge about any of this. It takes me years to figure out basic things because I have to randomly discover them. Maybe this makes my stuff appear a little more unique but it also inhibits me as well. I don’t have that well of knowledge to help me think through a visual problem. 5. Make and mail at least 365 things. 6. Go bigger. In the past year I started making a lot of bigger collages, ones on reclaimed canvases and store bought art boards. Most of what I’ve created I’ve given away. More than a few of them were of my own face given as jokes when in reality I was trying to figure out the angles. Only in the past couple of months have I started to stockpile some of these creations in a large bin in my basement. For most of the year I gave away everything made. I have no idea what I’m going to do with these items but they’re there. I think it be fun to have a strange yard sale with them. Maybe someone would want to put them on a wall somewhere?

K.S. Chambers said…
Jon, you're a brave man making resolutions. I don't do things like expect myself to hold myself to a new standard come the new year. I either do so or don't, time will not dictate my evolution, or devolution, whatever it may be.

If I was to make any resolutions, they'd have to be things like, should I be more or less obsessive about certain things, like putting my left shoe on first, every time I go to wear shoes — there are days I don't . . . wear shoes that is. At this point, I'm not too particular about which shoe goes on first as long as I get them both on the correct foot and remember to put the socks on first [before the shoes].

I was just thinking earlier this morning, should I smoke more or less this year. That's a hard decision, the kind of thing I wouldn't want to make into a New Year's resolution. Either way I decide, I'd probably do the opposite . . . the humidor is currently empty, so I'll probably smoke less for the next month or so . . .
That reminds me, I think I might be one of those jerks that you sent a colab book to and you never saw it again; I don't want to make any resolutions, but there's a good chance you might get that book sent back to you sometime this year.

Good luck with focusing on the tape thing. Your tape transfer collages absolutely rock. I don't know a lot of other people who make tape things [I'll not pressure you and call it art, it looks pretty damn close to art to me], but I'd bet that you're one of the best tape collage stuff makers in the world. Ask anybody, if they say otherwise, it's probably because they're just jealous of your abilities with the medium and won't admit your superior skills make them weak in the knees. After seeing your work, I tried to do some tape transfers of my own. They were incredibly horrid so I threw them away [I often destroy evidence of failure and encourage others to do the same]. No worries, I have yours to admire and that's good enough for me. Tape on man.

K.S. Chambers said…
ps. please don't hold me to that colab book comment; there's still one page to be [filled, composed, something] done. And about that thing of going bigger, yea, but it's harder to mail if you go too big. You'll have to go inside the post office and they'll get out that string thing and start measuring the girth of your parcel and look at you sideways while they're documenting it, all the while wishing that their lunch break would come sooner so they can go out back on the loading dock and have a smoke. Or you could build a really big mailbox with a really huge slot that the bigger mailart pieces will fit through, then some night you and some friends can covertly install it in front of the post office — I'd recommend a prefab cement pad as that otherwise you'd have to wait around for the concrete to dry before you put your gargantuan mailbox on top of it and anchor it down . . . I don't think they'd catch on to the new mailbox — these things often appear because of some cash-happy congressional rep wanting to do things in a big way — and then you can drop off those big pieces without having to put up with some sideways-staring, tobacco-breath federal employee checking your girth [although all the clerks at my post office are sweethearts and usually have okay smelling breath; not that I take note of such things].
January 15, 2016 at 12:27 AM