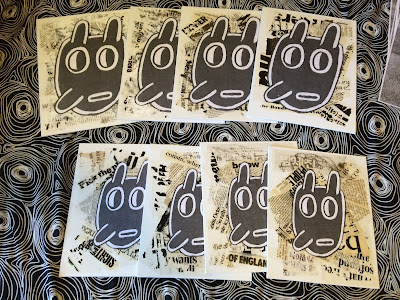 I’ve noticed that I tend to do more once I have more to do. When the schedule is wide open and I don’t have any projects needing to be finished I do little. Whenever I’ve got one thing going I end up starting another almost immediately. Within the week I have made and then sent out small Richard packages to about twenty people, made packages out of the stickers of my face, worked on getting together another rather involved project with a mail-art friend in South Carolina, and I started on these bunny faces. Somewhere in the middle of doing all of the previous work it hit me, why not another add and return? Instead of making collaborative books or just add and pass sheets, I thought about doing something a little more permanent, a little more sturdy. I took a bunch of 9 x 12 boards and laid down a tape transfer base, all black and white, and almost exclusively words. Doing this gives the creation a bit of texture once you start layering a bunch of garbage on top. For no particular reason other than to peak others’ interest, I printed off and then cut out a bunch of 8 x 10 Ray Johnson bunny heads that I glued to the top. The aim was simple, advertise an “add and return” where I send two of these almost identical boards to whomever was interested. They add stuff to both of them, keep one, and then send the other one back to me. Surprisingly, people were interested in the project, I got seven different requests in a couple of hours. To keep people from asking to participate well after the project was finished, I deleted my entries on the IUOMA page as well as my own personal page. I thought it would be fun to extend the invite to friends, which is something I need to do a lot more. One of the problems with this project is that I had to do twice the amount of work. Since I wanted them to be somewhere uniform I made all of them exactly the same. I wanted to see the point where each person deviated from my main idea. Making all of them look the same meant I could see the pattern that each mail-artist was presenting. It was much of an experiment as it was an “add and return” project. The second issue was the USPS. Postal rates are insane nowadays. Rarely do I end up sending bigger projects out of the country simply because of the price. It’s a real commitment to spend time and money and materials on something that doesn’t have a strong chance of coming back to you. Thankfully the two people that I sent to out of the country (one to Canada and the other to France) are both reliable people, folks that I’ve traded with consistently for a while. Thinking of the price I made 8 x 10’s to the international folks, cutting the weight and size down a little bit. The one to Canada cost a little over fifteen dollars and the one to France cost twenty-two dollars. Waiting on their return is the exciting point, never knowing exactly when they’ll show up. Three of them I’m mailing stateside, and all three are to folks that I’ve traded with for years. Two of them are going to a friend in Winston that I can drop off at their house and the other is to my mom. I have a key to her house so I’m pretty sure I’ll get that one back. Lynn Britton Radford (PA, USA) Moan Lisa (IA, USA) Allan Bealy (NY, NY) E Ambassadeur d'Utopia (Givry, FR) Erinn S Young (Innisfil, CN) Mary Crockett (WS, USA) Debbie Brown Foster (Lexington, USA)

zzzzzzzz said…
@back.roads - Thanks so much for the kind words. I will for sure add you to the next list.