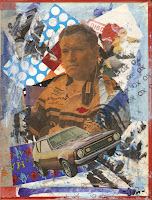 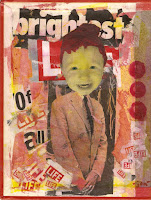 Now that the summer is over for me (when I go back to school then summer is over) I’ve started to shift my focus. For most of the summer I was continually looking at the yard, trying to find things to do down there. Since I was in the yard so much I wasn’t making as many things as I’d like. The summer is over so the transition to mail-art has begun. The upstairs is coming along, it feels right. I’ve got things on the walls and have a short hand for how to work up there. Normally I start work in the evening, and often for an hour or so. It’s too hot in the middle of the day to try and be productive so I wait until it cools down. I don’t think the mobile air-conditioner is that effective in the middle of the day, maybe in the evenings? Either way, because I have the space I’m able to have a few things going at once. I work on this over here and then move to that project, it’s quite perfect. I’m up there making things with the radio on, the fan going, and materials moving around the room. I’ve made it a point to just let things happen, not worry if the space gets too messy. On a side note, all of the smells from dinner get trapped up there, so if the meal was good it’s a nice thing to be able to revisit. On the docket for the past couple of weeks have been getting Add and Pass materials together. I wanted to make up a bunch of these for the “lean times.” You know, have something together to send to people when I’m not making more creative items. I’ve made some tape cards that I’ve used the “rip method” on and some packets of random bits of paper. What I’ve spent the most time on were the bigger items that I’ve attached images of here. The bassoon one is for my nephew who plays that instrument, the red-haired kid is Clark, and the three of Rowdy Burns goes to Stef, Caroline in LA, and John C. Reilly. I felt I had to make something for JCR (I’m going to write more about this later on) especially considering how much my letter to him focused on Days of Thunder. Hopefully everyone likes their terrible movie themed art. For the three Rowdy Burns items I’ve used a lighter touch. So often I’ve filled the space with too much stuff, too much color, and not enough “nothing.” For some reason I felt like every single inch needed to have color. I also felt like the space needed words, so I often put in the character’s name in stickers or in handwriting somewhere on the piece. I just didn’t want to do that this time, just focus on the main image and let the viewer find their way around it. Overall they came out pretty well even if I don’t think the three of them are equal. I decided to let chance decide which image went to which person. What came out was pretty good but I’m not there yet. It’s less cluttered and less of an eye assault but it still feels off. I like the juvenile and haphazard nature of what often comes out, but I want to try and rein it all in when I want to. What bothers me most is the focus on the figure, it’s always there and right in the middle. For projects like these I like to stay with a figure because that’s what people enjoy. Most people want to look at a thing and then recognize that thing, nothing much past that. The more astute people will focus some attention on the mess keeping it all together but I would say they’re the exception and not the rule. I want to make sure and keep this balance between the figure everyone is going to focus on and the stuff surrounding it. I want a dynamic and colorful composition that can be enjoyed by people willing to focus and also enjoyed by people unwilling or uninterested to do so.

tonipoet said…
Very interesting to read your thought process in creating your art.
August 17, 2016 at 10:16 AM

zzzzzzzz said…
@Amy-thanks so much.

@Toni-I'm not sure why I feel compelled to write a long narrative with these things, but I do. Maybe I wish others would do it so I could learn a bit from them, not sure? Thanks for saying hello.
August 18, 2016 at 4:37 AM