on February 14, 2013
It seems that a lot of my items have hit their mark lately. Maybe I’ve been sending a lot of things to people who scan them consistently, I’m not sure, but either way, they’re showing up in great numbers. Two cards that have appeared online I remember making very vividly. Often I make six or seven or eight cards at a time, so they look a little alike, have the same source material etc. They also get scanned right around the same time as each other. 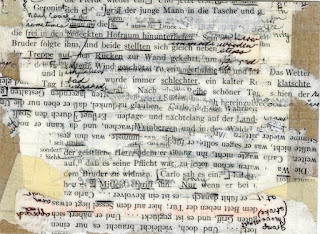 This card I sent to the lovely Amy Irwen in Rosemount Minnesota. No images on this one, which is kinds of odd for me, but every once in a while I like to mix it up. This cards construction relates back to another post I did about a Thomasville library sale. At that sale, I bought the images that make up this card. It was a book, a German book with a ridiculous amount of highlighting and notes in the margins. The book contained so many marks that I felt I had to buy it, otherwise I would have left it on the table. I’ve never seen a book so marked up. It was a simple premise, overlap the images and let the dissolves in rips create a blurry illusion. You can see a few pen marks in there as well. I kind of like this one. 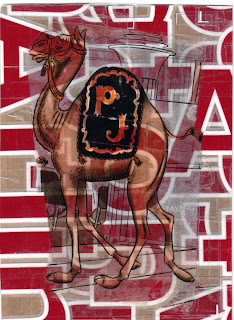 I sent this card to Lindsay Stewart in Halifax Nova Scotia. I like sending things to Lindsay. On my last trip to SCRAP in Durham, I bought a lot of large decals that just read American. I guess it had something to do with the airline, I don’t know. Basically I cut them up into smaller pieces and arrange them on too small of cardboard. I thought the confusion would make an interesting composition of bits of letters-that was not the case. I really hated the final product. Instead of abandoning the whole endeavor, I took out a couple 1940’s Time Magazines, made some transfers and slapped them on top. Not sure if the end product was much better, but it was slightly better.

zzzzzzzz said…
I'm glad you like it Amy. It really is, I guess that's why I ended up writing about it, just to think through the process and see how other feel.
February 15, 2013 at 5:09 AM

Cappuccinoandartjournal.blogspot.com said…
Love that super marked up book -- I wouldn't have passed it up either -- and love the card you made with it.
February 15, 2013 at 4:39 PM