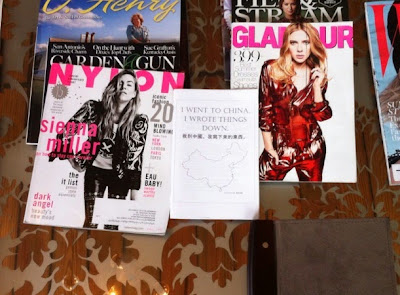 A couple months back a friend sent me a message asking if I would send him some zines. This wouldn’t be out of the ordinary except he wanted them for his salon. Since I’ve never had anything I’ve written in such a locale, it seemed like a worthwhile endeavor. I sent him a bunch of zines, maybe the last four or so, and that’s all I thought about it. A couple weeks ago my friend Tim goes to his salon and sees one the zines on the shelf and sends me this picture. The positioning of my silly ramblings in between Nylon and Glamour was perfect. I don’t think I’ll ever have such a stage. If you’re in Greensboro NC and you want a good cut and something to read, go by Fahrenheit Kollectiv. If you go in there ask for Neil and I’m sure he’ll make you pay a little extra.